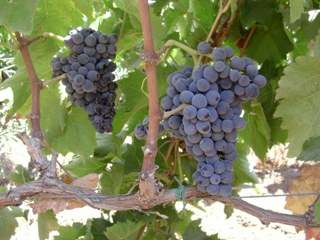 Our winery has decided to devote himself exclusively to the cultivation of native grapes, particularly the Nero d’Avola or Calabrese and the Moscato Bianco (white muscat). Undoubtedly, the Nero d’Avola is one of the best and oldest black grape of sicily. It is assumed that it was brought to the island by the greeks, but It was not possible to reconstruct with certainty its path. The Nero d'Avola is a vigorous vine with a remarkable genetic variability that manifests itself in the different forms of the bunch: from medium-large pyramidal and winged to small, tight trunk-conical.

In our vineyards the grapes usually reach full maturity in first to second week of september depending on seasonal climate. The resulting wine has a garnet red color, intense fragrance and elegant, full bodied, with good acidity and a high potential for aging. The moscato bianco has found its particularly typicality in the Noto and Syracuse area, from which are obtained the cuttings used in our vineyards.